Find the Prisk garden online on Facebook and through the William F. Prisk web site.

Let’s begin at the beginning, shall we, with the photograph to the right. The photo shows a (very) premature groundbreaking of our creek project (our preliminary title: “Tongva Creek,” reflecting the indigenous tribe of our coast; nearby on the campus of Cal State Long Beach was Puvungna village.) The photo is perhaps two and a half years old. I bought small red shovels for the Girl’s Leadership Group to distinguish them as supervisors of the boys (who used small dark shovels), at the groundbreaking. So far all we had was my yearly allotment from Prisk’s PTA to buy materials for the project. The Conze Grant was still in the future. I also bought some garden carts and rocks and pebbles, a small amount. I got together with our science teacher, David Macander, to discuss coming up with a wetlands curriculum. The creek was to be partially framed as a modest contribution to our vanished (and vanishing) wetlands in the State of California. David agreed, and we will develop this when the creek is finally “inaugurated” sometime next spring (2020). When I secured the Conze Grant of $7,160.00 about a year ago, I went to work buying materials.

Our local Prisk PTA was selected as the holder of the Grant funds, because they were a recognized, established Agency. Dealing with the paperwork involved, after the PTA seemingly tightened up its bookkeeping severely following demand from the State PTA, has been a major energy outlay, shall we say. After I had bought fill dirt, sand, and decomposed granite to build the creek infrastructure, giving it the requisite height in order to flow with some vigor down to our established fish pond (thereafter to be recirculated with bilge pump run by the solar power of two solar panels), I started buying large boulders (which delivery presented some inventive logistics), smaller rock and pebbles, and a massive pond EDPM sheet of pond liner.

The following video includes some “real” groundbreaking, with the kids taking delight in finding earthworms in the fill soil. Note in the background is an established “bioswale” that I had created before I even started on the creek. We are now establishing bioswales and “runoff/stormwater capture” areas wherever possible.

Kids taking delight in finding earthworms in the fill soil
From the beginning, besides the goal of contributing to a tiny restoration of CA wetlands, along with native wetland, aquatic, and riparian plants and critters (frogs, etc.), I’ve always seen the Creek Project as 1) another living laboratory for the life sciences, along with the various “biomes” and plant communities of the rest of the Garden, and an extension of the pond into which the creek will empty; and 2) a place where the kids can further enhance their contact with the therapeutic effects of the immersion in nature. (There are many studies on this: nature is a “de-stressor,” and the fact that we can have a “wild space” right on a school campus is a thrilling fact.)

To that healthful end, I envisioned a series of “sitting rocks” where young people can rest and watch a creek flow by. Perhaps eat their lunch or a snack at recess or in the lunch period. The very idea of a “schoolyard habitat,” after all, is to get kids out of a classroom and get them outdoors and away from technology and media. The kids will select a stone on which to sit to watch the creek flow at the Creek’s “Dedication,” for which I’ll re-invite the Mayor of Long Beach and a Tongva Elder for the occasion. Our 1,700-lb. sitting rock, our largest, which the kids have dubbed “the baked potato.”

The creek will flow right by the rock just before it empties into the pond. (Besides costing more than $400 and almost destroying a bench in the Garden, I had to buy large sheets of sheeting plywood on which a forklift could traverse our gravel-covered paths; but the imposing look of the stone, as well as the smaller but still huge rocks in the background, and their future use as a seat for generations of kids is well worth it.)

We also have a third reason (among many more I could imagine!) for the creek: as an engineering project. The bilge pump in the existing pond (our pond is 23 years old and contains native arroyo chub, which I secured years ago as per a letter from CA Fish and Wildlife) recirculates and oxygenates the water in the pond, but now, with purchased “plumbing” of flexible hoses and couplings, the water will be drawn approximately 35 feet up to perhaps a four-foot height and will flow, quickly and lazily in different spots, with two small waterfalls, back down to the pond, to be recirculated again. The “fall” (in the words of plumbers) is enough to create a “spring-like” look.

In the back of the “baked-potato” photo, you can see two solar panels on our tool shed. They run the bilge pump in the pond by solar power. We have no regular access to electricity in the Garden. Voila: an engineering project, with voltage, amperage, wattage, the works. So we have both “soft” and “hard” education connected to this project: Children’s health and children’s life/physical-science education. 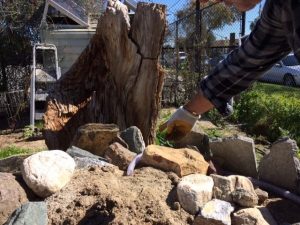 Right: Formation of top of creek with “plumbing” showing. “Found art” wooden shaved tree trunk as background. Accumulating rockery; some will be creekside “sitting stones.” Kids will mount (or descend) stepping stones on the other side of the bridge.

All of this was very time consuming. I kept buying stone. It was fun, mostly. I had outside help with some carpentry; Here, the carpenter cuts and installs our authentic juniper wood (!) steps leading up to the stone (ceremonial) bridge. (This juniper is imported from the high desert in Eastern Oregon, and I first saw them using it at the Mojave Desert Land Trust HQ. Had to have it despite outside labor and special wood costs, of course.)

The completed bridge. Kids will mount (or descend) stepping stones on the other side of the bridge.

Mixed gravel, sand, and rock form the creek. We did the middle of the creek before the top was finished. Scheduling, of course.

The first plant, planted by a Prisk student, at the top of the creek structure: basket rush, Juncus textilis.
I’ll have a score of wetlands plants in the creek, beside the creek, and around the structure. All native aquatic, riparian, stream side, etc. The top of the creek is finished, together with sitting stones where the kids can watch the flow issuing from the ground from unseen plumbing, resembling a small spring.

I’m down to perhaps my last two hundred bucks or so on the Conze Grant, and the creek has all the materials in store for my needs, except a few details, perhaps. The pond will take some work, including some new netting to keep out the raccoons, but it’s mostly tidying up, nothing really new. By far I’d say paying for all the rockery and stepping stones, including some major deliveries and delivery systems, etc. were the most significant outlays. Pond liner, contractor work, and infinite details including hardware, fasteners, tools and plants, follow. I have hundreds of receipts from the work.

The creek’s last one-third at the bottom should go more quickly, but I’m waiting for more kids to be available to put them to work: Girl Scouts (“Daisies”) and science students. It’s the holidays, and I have to work around them and the teachers’ and PTA moms’ schedules. It’s been extremely intensive and detailed work, and both a joy and a stressor. Dealing with the new accountability requirements passed along from the State PTA to the local school PTA’s has been initially very frustrating, yet they’re the agency most available and logical to hold the funds. The Prisk Foundation had ridiculous and undoable requirements. But now the President of the PTA and I now are pretty much humming along after ironing out all the glitches and adjustments. Just to let you know the “inside story.”

Thanks for listening! So there you have it. When I have further pics, I’ll send a few, including perhaps later the Mayor photo op. (BTW, our Mayor, apparently a rising political star, loves him some photo ops!)